Below, you will find the answers given by BATF Edward Owen at the Lockerbie trial. I have highlighted a few answers that may be of interest. I have added some pictures to help the readers to follow the questions/answers.

Owen states that he saw one timer.

He also states that all the photos were taken in Togo. Considering that some of the pictures show the timer dismantled, I conclude that he must be a very brave man. For you may remember that the working conditions were not exactly ideal.

“The equipment seized from the rebels was supervised by a 6’4″ heavy set colonel. On several occasions, he became very upset. At one point, he drew his weapon in anger.”

EXAMINATION IN CHIEF BY MR. TURNBULL:

Q And are you an officer of the Bureau of

A I am presently retired. I was an

officer of that agency until the 1st of June of this

Q Thank you. How long did you serve as an

officer of that agency?

Q During your time with the Bureau of

Alcohol, Tobacco, and Firearms, did you have a

A Yes. I was chief of the firearms

technology branch. I was the chief firearms expert for

your capacity as a member of the bureau to go to Togo?

Q And did you go along with a colleague,

Q When you arrived in Togo, were you taken

to be shown a number of items?

Q And were they in a hut of some sort?

A Yes, they were.

Q At an army base?

Q When you saw the items within the army

base, Mr. Owen, were you permitted to examine them?

Q And we understand there were a selection

of items, including weapons, explosives, and items

A That is correct.

Q Did you take a particular interest in

any of the items that you were asked to examine?

A My particular interest was examining and

Q So does that mean, broadly, the guns?

Q Thank you. Did you become aware of an

item that wasn’t a firearm that some of your colleagues

took an interest in?

Q And what was that?

A It was a timing device.

Q How many timing devices were you aware

A I remember seeing one.

Q Thank you. What was done with the

timing device that you are speaking of?

A I was asked to photograph it.

A I took a series of photographs. And the

last I saw of it, it was back in the hut.

Q The last you saw of it was what, sorry?

A Was back in the hut.

All right. Were any items taken from Togo to

the United States of America?

A I understand a timer was returned via

Q Did you see that happening?

A I saw the diplomatic pouch. I do not

know what was in it.

Q Did you ever see any of the contents

removed in the United States?

Q All right. You did take some

photographs in Togo, though?

Q Could I ask you to look at Production

Do you have before you a booklet of the

photographs that you took in Lome?

If you bear with us for a moment, Mr. Owen,

we will see the photographs on our screens.

What do we see in this photograph, Mr. Owen? 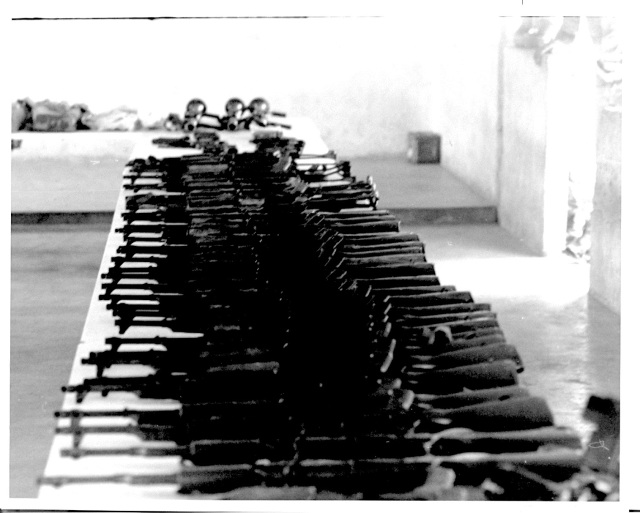 A The photograph numbered 30 in the book

filled with weapons. This is primarily Eastern Bloc

the table to the rear are RPT-7 grenade launchers.

Q I see. And were these the sort of items 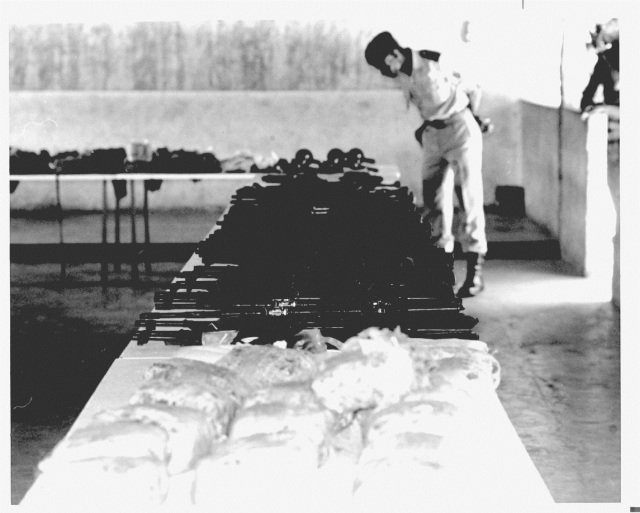 And do we see here a further view taken

within the same area?

Q What are these objects we see near to

the bottom of the photograph?

A In the foreground?

A It’s some type of explosive material.

Can we look at photograph 32, please.

And we have a view, I think, perhaps of

another end of the table; is that correct?

A This is the far end of that same table,

pistols, magazines for the handguns, Taurus

and again, in the background of the photograph, are

Do you recognise what we are now looking at,

A It’s a timing device.

Q Is that the timing device that you spoke

to me about a moment ago —

What are we looking at here —

A This is the same device.

Q And do we see that it has attached to it

a black — or a dark colour, at least — lead of some

Q And it has a connection attached to it

which we can see at the bottom right of the photograph?

Q Would you look for me at image 3,

please. What are we looking at here, Mr. Owen?

A This is a covering case of some type

Q A covering case of what, Mr. Owen?

A I think it may be the rear cover to the

Q I see. Thank you. Can we move on to 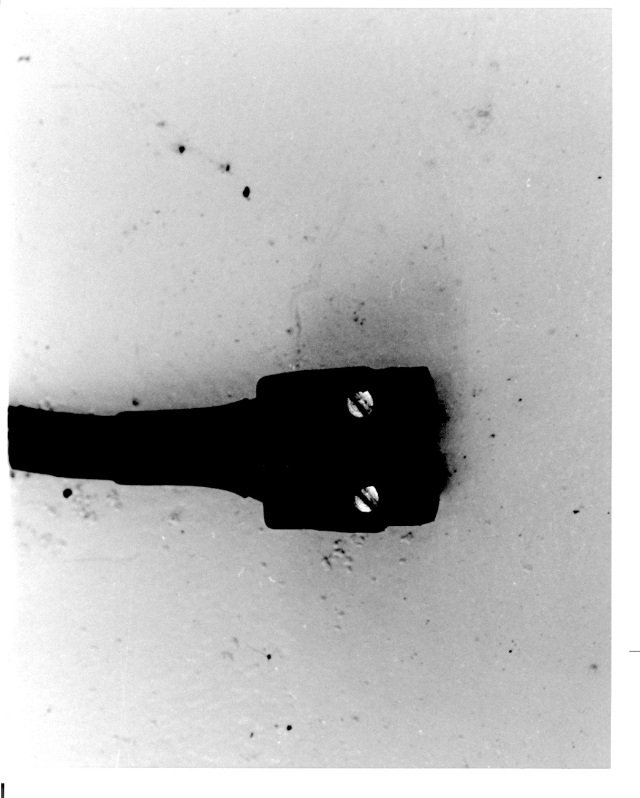 And is that a view showing the end of the

lead that we identified a moment ago?

What does that show, Mr. Owen?

A It shows the circuitry of the timer.

Q So that’s a view showing what lies

behind the top face of the timer?

Q And image 54. Is that a closer view of 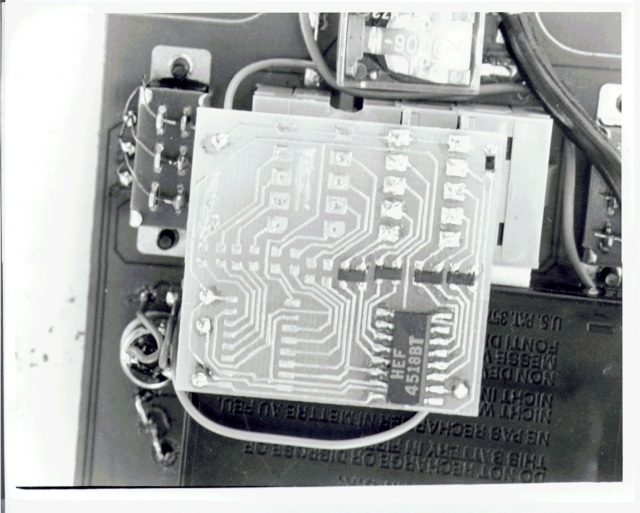 What are we seeing in this view, Mr. Sherrow?

A Again, this is the interior of the

Q I see. Now, can we appreciate from this

view that there appear to be two printed circuit

boards? There is the larger one around the outside,

which the circuitry is attached to, and then there

appears to be another one, raised, in the middle of the

Q And there are several components

attached to it as well?

Q The smaller of the two printed circuit

boards appears lighter in colour in the photograph?

Q Can I ask you to look over towards the

left-hand edge of the light-coloured circuit board.

runs parallel to the edge of the small circuit board?

Q And if you move just in from that to the

right, you come to an area which is free; it has no

components attached to it; there is just a free space.

Do you see that?

Q And is there some sort of apparent

marking in that area?

Are you looking at the photograph or the

A I have nothing on my screen, sir.

A I’m not sure I understand what you are

asking me to look for.

I think this exercise is only possible by

using the magnifying facility of the computer and the

screen, My Lords. And therefore I think I’ll simply

depart from it at this stage.

Q The photographs we’ve looked at,

Mr. Owen, are all photographs which you took; is that

Q Whilst you were in Lome?

Thank you, My Lords.

in company with Mr. Sherrow?

Q And you’ve told us that the photographs

you took were taken in Lome or in Togo?

Q Is that in the tent or somewhere else?

A It was right outside the hut. There was

a tree — a table placed under a shade tree.

Q Okay. And did you examine all the

ordnance that was there?

A All the weapon ordnance, the firearm

Q Did you have a look also at the — where

the timer was situated?

A I did not see the timer until it was

brought to me outside the hut, when I was photographing

Q And somebody asked you to photograph it?

Q Who was that?

A It would have either been Mr. Sherrow or

the security officer from the U.S. Embassy in Lome.

MR. KEEN: I have no cross-examination, My

MR. TURNBULL: I have no re-examination.